Prep Time: 20 mins
Cook Time: 1 hr 30 mins
Potatoes are roasted and scooped out and then mixed with a combination of sour cream, milk and lots of cheddar cheese.

Potatoes are roasted and scooped out and then mixed with a combination of sour cream, milk and lots of cheddar cheese. The potatoes are then refilled and baked until the tops are golden brown. I have a love of twice-baked potatoes going back to childhood. I use Cheddar cheese though other varieties can easily be used.

My dad used to get shipments of Omaha steaks and while I wasn’t the biggest meat eater growing up, I loved the Cheddar twice-baked potatoes that came alongside the steaks. Serve this recipe as a side dish alongside a pan-seared flank steak with chimichurri or this surf and turf combination.

What you need to make these potatoes

How to make this recipe

If you Don’t have a stand mixer

Other Cheeses to Use

Swap the classic Cheddar cheese for any of these favorites:

For a more polished look

For a more polished look, pipe the mashed potato mixture into the baked potato shell using a pastry bag and a large star tip.

Why are my twice baked Potatoes gummy?

Over-mixing your potatoes can lead to a gummy end result. Luckily since you are baking the potatoes rather than boiling them as you would with mashed potatoes, there is less space for them to get watered down and gummy.

If you enjoy this twice baked potatoes, I recommend checking out these other potato recipes: 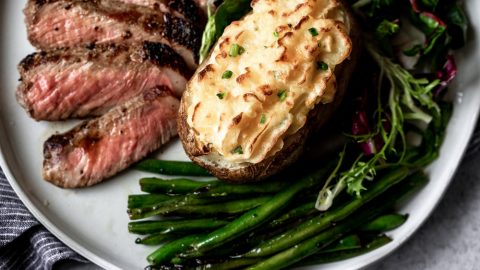