Prep Time: 1 hr
Cook Time: 20 mins
In this Middle Eastern recipe Pita is stuffed with kofta, a seasoned lamb sausage and seared until crisp and served with tahini.

Arayes are meat-stuffed pitas, served filled with kofta, a Middle Eastern dish with ground lamb or beef mixed with aromatics and spices, commonly served as street food. They are seared and cooked, so the meat is juicy and tender inside the pita and crisp and fried on the outside. I use lamb in my arayes recipe.

As the lamb cooks, the juices seep into the pita to infuse it with rich flavor and help it crisp up. To balance the rich flavor of the arayes I like to serve them with light, creamy tahini sauce and hot sauce as well as fresh chopped tomatoes, onions and peppers paired with arugula.

The irresistible combination of spiced meat, usually lamb, and crispy yet chewy pita bread is easy to make. The meat kofta mixture can be made ahead of time to let the flavors meld, then packed into pitas and cooked. It’s the perfect dish to add to a busy weeknight menu. Enjoy it al fresco paired with a light arugula salad like below or a tomato and feta Greek salad.

This version of arayes is inspired by one of my favorite Israeli restaurants in Brooklyn, 12 Chairs. There are many variations on this popular Middle Eastern street food. The recipe doesn’t differ as much regionally among Syria, Lebanon and Israel as it differs from restaurant to restaurant. Egyptian hawawshi are also similar, seasoned with a mix of coriander, allspice, paprika, cumin, cardamom, and a bit of cinnamon.

Some versions use beef fat to brush the meat before searing it and the pita though I go with olive oil. They can also be made just in the oven, cooked at a high temperature until crispy or made on the grill so you get char marks. Other variations cook the meat first, more like a patty before serving it inside the pita – more similar to a hamburger.

Arayes are traditionally made over a charcoal grill. Some are made very thin, much more like a meat filled pancake, so they are extra crispy. This version has a bit more meat so you have more surface area to sear it. Some recipes also include pine nuts for additional nutty flavor and texture.

Pulse the onion, garlic and herbs in a food processor until they are minced.

In a large bowl, use your hands to combine the lamb with the onion and herb mixture. Add the paprika, coriander, cumin and cayenne. Season with salt and pepper. Cover and refrigerate for at least an hour or up to a day before cooking. While the lamb can be used immediately, letting it sit allows the flavors to combine.

Fill the pitas. Cut each pita in half widthwise. Divide the meat mixture into 4 equal pieces, spreading each evenly with the lamb mixture. Close and cut each pita piece in half again so you have 8 pieces total.

Cook the arayes. Heat a large cast iron skillet or other oven safe pan over medium heat. Add the olive oil and heat through. Add the arayes, one of the meat mixture sides down on the pan. Sear the meat until golden brown, about 3 minutes. Rotate and sear the other side for an additional 3 minutes.

Finish cooking in the oven. Lay the pita down in the pan and move the pan to the oven and bake at 400ºF (200ºC) until cooked to medium rare.

Add the tahini to a small bowl. Serve the arayes with tahini and hot sauce.

Tips For This Recipe 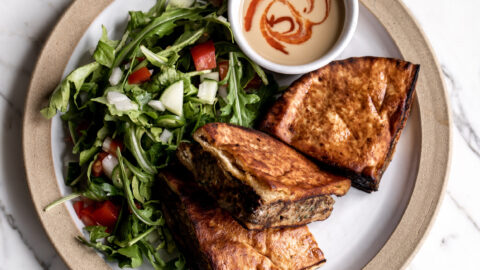 For the meat mixture:

For the meat mixture: