This roasted cauliflower pita is my favorite vegetarian meal to make for “meatless Monday”, or any other day of the week, with only 30 minutes of prep time!

This vegetarian recipe is based on the lavan pita from Miznon, a fast-casual restaurant in New York’s Chelsea Market (as well as Paris) serving Israeli food with a French twist. A whole head of cauliflower is first boiled until tender in heavily salted water. It’s then drizzled with olive oil and broiled until browned all over to add a slightly charred flavor. I break the tender head of cauliflower up into smaller pieces and toss it with green onions, radishes, sesame seeds, tahini and zhoug, a Yemini spicy cilantro sauce.

This version of shawarma, popular street food made with roasted meat served over or stuffed inside a pita is made vegetarian using roasted vegetables. This entrée is not only vegetarian, it’s also vegan, dairy-free and can easily be made gluten-free by substituting the pita for a gluten free version or by wrapping the cauliflower mixture in leaves of lettuce.

What’s in this Pita?

How to Make Cauliflower Pitas

Heat oven to broil on high. Place it on a baking sheet and drizzle with the olive oil. Season with salt and pepper.

Broil until the cauliflower is lightly charred on the top, about 5 minutes, checking occasionally.

Add the cauliflower to a medium mixing bowl and break into smaller pieces with tongs.Top with the tahini, zhoug, green onions, sesame seeds, tomatoes, and diced radishes, tossing to combine.

Pile into the warmed pitas with pickled onions and arugula and serve.

How to Prep the Cauliflower Ahead of Time

The cauliflower can be boiled ahead of time, then roasted or broiled just before serving. To reheat the cauliflower, heat the oven to 425ºF (220ºC) then wrap the whole head of cauliflower in foil and heat until warmed through, about 10 minutes. Assemble the mixture as directed below.

Swaps and Substitutions for This Recipe

If you enjoy this cauliflower pita recipe, I recommend checking out these: 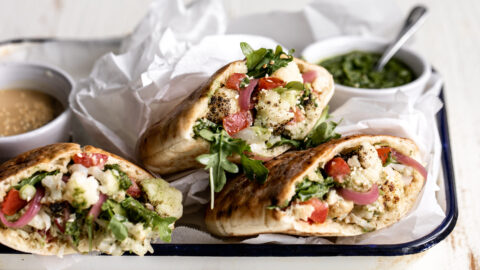