Prep Time: 20 mins
Cook Time: 0 mins
In this New England-style lobster roll recipe, my dad keeps his lobster salad recipe simple, adding only some salt and pepper with a little cayenne to season the filling alongside a bit of celery and mayonnaise.

To me lobster rolls are the epitome of summer. I think of hot summer days, the humidity hanging heavy in the air, and time spent lounging by the pool at my family’s house in New Jersey, only moving from my lounge chair to venture briefly between the pool-yard and the air-conditioned house. We all gather around the outside bar area and my dad makes plenty of lobster rolls to feed everyone with the leftovers from the lobster boil the day before.

Whenever we buy lobsters we make sure to buy enough that next-day lobster rolls are a guarantee. My dad has been making lobster rolls ever since I can remember and I favor his to any other I’ve tried.

In this New England-style recipe, my dad keeps his lobster salad recipe simple, adding only some salt and pepper with a little cayenne to season the filling. He uses just enough mayonnaise to make it creamy. It’s simple but it lets the sumptuous and delicate flavor of the lobster shine, piled high into a butter-toasted top-cut roll.

Lobsters are harvested in New England year round though they are primarily considered to be “in season” during the summer months starting in June. During the summer I usually buy live whole lobsters and cook them myself for dishes such as this. During the cooler winter months I frequently opt to have the fishmonger boil or steam them so that I can just pick them up. But if you are buying your lobsters whole, it takes about 4½ pounds of live lobsters to get 1 pound of meat.

If using fresh lobsters, buy them as close to the time you plan on cooking them as possible. They can be purchased a day beforehand and kept in the refrigerator, wrapped in damp paper towels or newspaper to ensure they remain alive until just before cooking.

Easier still, you can find lobster meat already cooked, broken down and removed from the shell at some specialty seafood markets.

How to Prep Lobster Rolls Ahead

The lobster salad can be made a day in advance. Butter and toast the rolls then fill them just before serving.

If you enjoy this lobster roll recipe, I recommend checking out some of these:

Some of my Favorite Lobster Rolls Recommendations (from Restaurants!) 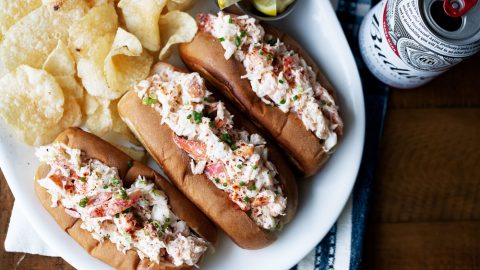