Prep Time: 10 mins
Cook Time: 50 mins
A proper New England clam chowder should consist of a delicate and creamy, slightly thickened broth (but not sludgy) that contains a hint of smokiness from bacon and an abundance of clams.

My true appreciation for New England clam chowder came from going to Martha’s Vineyard during the summer when I was younger. My brother and I would take our kayaks out in the water with our Dad and our family friend, Sam, to go clamming. You use a large rake to dig through and find the clams under the sand. When we got back to the beach house, Sam would make us clam chowder with the clams that we brought in.

I always use littleneck clams for New England clam chowder. I find them to be much more tender and easier to serve whole than larger clams. If you have larger clams like quahog, give them a rough chop before they’re added to the soup. The clams can be steamed ahead of time just be sure to reserve the cooking liquid as well.

Chopped bacon adds a smokey touch to the soup while cooking in the vegetables in the bacon fat adds much more flavor to the base of the soup. If you choose to omit the bacon, then use butter to cook the vegetables.

Yellow onions are my go-to all purpose onion. While they have a strong flavor when they are raw, the flavor mellows when they’re cooked.

The leftover bacon fat is used as the base of the roux which will thicken the soup. Flour is cooked in the bacon fat until golden to keep the soup from getting grainy with any lingering taste of flour.

Chicken stock adds flavor to the broth. I use half chicken stock and half of the clam liquid so that the broth doesn’t have too much of an overpowering seafood flavor.

The potatoes are simmered in the broth until fork-tender. I use classic Russet potatoes in this soup though waxy potatoes work very well because they hold their shape more.

The cream is used to create a rich, velvety soup. Rather than create a milk base I use a chicken stock and clam base finished with heavy cream.

How to Make Clam Chowder

Steam the clams, remove them from their shells and set aside the clam meat and cooking liquid.

Cook the bacon until it’s crispy then use a slotted spoon to set the bacon aside and return the pan to heat, reserving as much bacon fat as possible.

Add the butter and allow to melt then add the onion and celery and sauté until tender.

Add the garlic and cook briefly then stir in the flour.

Add the chicken stock, reserved cooking liquid, bay leaves, potatoes, and thyme and simmer until the potatoes are tender.

Add the cream and continue to simmer until slightly thickened.

Discard the bay leaves and sprig of thyme. Add the bacon and clams to the broth, then stir in the Worcestershire and season to taste with salt and pepper.

Ladle the soup into bowls, top with chives, and serve with oyster crackers.

What to do if clams are out of season

If clams are out of season of if you can’t find fresh ones, you can substitute with one pound of chopped canned clams and 2½ cups of clam juice (in place of the steamed clams and water).

When fresh clams, discard any clams that are already partly opened before steaming or ones that do not open after steaming as they are already dead and likely have gone bad.

Hot tip: Try adding a bit of Crystal or Tabasco hot sauce at the end for a kick of spice. 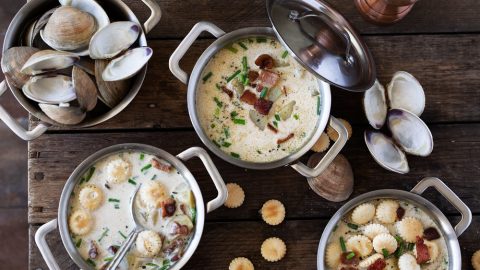