Prep Time: 10 mins
Cook Time: 20 mins
This version is based on a Southeast Asian recipe that is also referred to as “laap” or “laab” and is filled with herbs, fish sauce and shallots. It originated in Laos but has become a beloved Thai dish as well.

I learned how to make “larb” on my honeymoon in Chang Mai, Northern Thailand. My husband, Aaron, and I took a cooking class together which was one of the highlights of my trip and resulted in this recipe for a minced meat salad.

This recipe is based on a Southeast Asian recipe that is also referred to as “laap” or “laab”, filled with herbs, fish sauce and shallots. It originated in Laos but has become a beloved Thai dish as well. The meat is traditionally finely chopped using a cleaver, but it takes a long time to get the pieces that small, so I opt to use ground pork purchased from the meat counter instead.

There are many different ways to prepare larb. At its root, larb refers to meat that is chopped and cooked combined with the herbs and seasoning. It can range anywhere from an intense Northern style larb meuang with naam prik, to versions made with offal (entrails and internal organs) which most American versions tend to ignore, preferring to a lighter, easy to prepare Issan-style larb like this one.

With its fresh, chopped herbs, bright and funky fish sauce and spicy Thai chilies this tangy dish hits all of my favorite flavor notes. It’s incredibly flavorful yet easy to make. Larb is traditionally served accompanied by cabbage, long beans, and sliced cucumber as vehicles for the dish though I often eat it over rice for as an easy dinner. Based on accessibility I substitute green beans for the long beans and add a head of butter lettuce because I like scooping it into little leaf “cups”. For a lighter take on this pork larb recipe the ground pork can be substituted with ground chicken or turkey.

Ground pork typically comes from minced pork shoulder meat and is incredibly versatile. It can be swapped for another lean ground meat like turkey or chicken in this recipe.

I love the funky umami flavor fish sauce adds to any dish. It’s a great way to enhance the flavor of curries or even chicken wings. The flavor comes from a process of fermenting fish over a long period of time.

Lime juice works well with the fish sauce to balance the flavors in this dish.

Bird’s eye chilies or Thai chilies are small, pointy chili peppers that pack a punch. They add an intense heat with fruity flavor to dishes rating between 50,000 and 100,000 Scoville units. Since they can sometimes be difficult to find I usually buy a large bag at them at my local Asian market and store them in the freezer in a resealable plastic bag. It’s actually even easier to cut them when they are frozen.

Lemongrass adds a bright, lemony flavor to dishes. Fresh lemongrass is best for this recipe since it has a more complex flavor. Pre-packaged paste or dried lemongrass can be substituted if needed. Only the bottom yellow part of the lemongrass stalk is used in cooking, the top part is typically much too tough.

Shallots are both added to the larb raw, thinly sliced as well as fried until crispy for a savory crunch over the finished dish.

In this recipe I use both the white, more pungent bottom parts of the stalk as well as the more mild green tops.

Mint is used as a contrast to the green onion, cilantro and lemongrass to create a vibrant flavor profile in this recipe.

In the United States, cilantro refers to the stalk and leaves of the plant while coriander refers to the dried seeds. In many other cultures the terms are used interchangeably. This herb is one of my favorites and it adds a bright, lemony flavor.

How to make Larb

Cook the pork in a skillet until cooked through. Remove to a mixing bowl.

In a small mixing bowl whisk together the fish sauce, lime juice, Thai chilies and lemongrass.

Pour over the pork mixture and toss together with the shallots, green onion, mint and cilantro.

Top the larb with the shallots and serve with vegetables. 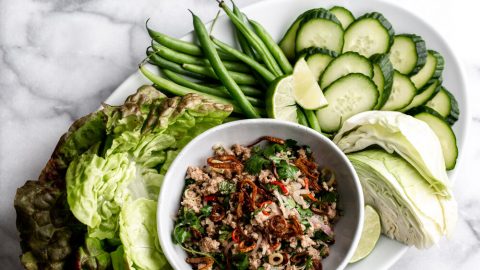