I’ve been inspired by my recent trip to Thessaloniki, Greece where I loved eating these flavorful lemon roasted potatoes as a side dish. These Greek-style lemon potatoes pair well with anything from chicken souvlaki to seared steak. They are tossed in a seasoned liquid of chicken broth, olive oil and lemon juice. The goal is to partly braise the potatoes in the stock so they remain tender, then when the chicken stock and lemon juice absorbs/evaporates, the edges of the potatoes become crispy and fry in the remaining oil.

What Makes These Potatoes Different?

Unlike most roasted potato recipes, Greek-style potatoes are first cooked in a broth and lemon juice mixture. Once that absorbs or evaporates, the potatoes fry and develop golden brown crispy edges in the remaining oil. It’s important to turn the potatoes and keep an eye on them once they get to this point so they don’t burn.

How to Make Lemon Roasted Potatoes

Preheat oven to 400ºF (200ºC). In a large mixing bowl whisk together the lemon juice, olive oil, chicken stock, garlic powder and 1 tablespoon of the oregano.

Add the potatoes to the bowl and toss to combine.

Spread the potatoes in an even single layer on a large rimmed baking sheet or shallow baking dish. Season with salt and pepper.

Roast the potatoes until tender and the stock is absorbed, about 35 minutes. Flip the potatoes and continue to cook until they are golden brown with crispy edges for an additional 20 to 25 minutes. If desired, broil on high until golden brown, about 2 minutes.

Serve garnished with the remaining oregano.

If you enjoy these lemon roasted potatoes, give these Greek recipes a try. Follow me on Instagram for more updates: 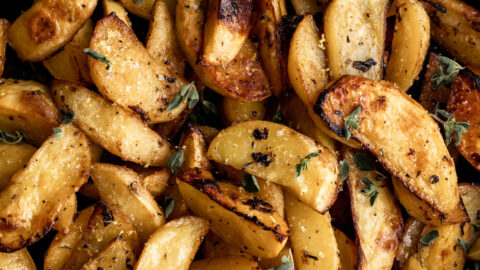