This smoothie, aptly named for its sky-like quality (bright blue color thanks to spirulina Blue Majik) is made with coconut, almond milk, almond butter, avocado, pineapple, banana and more. The recipe balances creamy ingredients with frozen fruit. I recommend using a high-power blender to create the best texture for the smoothie.

The bright blue fruit smoothie is a collaboration between Marianna Hewitt and the upscale Los Angeles-based grocery store chain, Erewhon. When I was living in LA I loved perusing the aisles of the grocery store. While pricey, it’s a celebrity favorite and also beautiful, with a whole wall of soups in mason jars and multi-color organic fruits and vegetables. Whether you’re looking for a more affordable option or like me, you no longer live on the West Coast, I’m sharing my take on this coconut cloud smoothie so you can make it at home.

How to Make a Coconut Cloud Smoothie

Add ¼ cup of the coconut cream, the almond milk, avocado, banana, pineapple, almond butter, ¾ teaspoon of Blue Majik, vanilla and peptides, stevia (optional) in the base of a blender with the ice.

Blend on high until smooth.

Add the remaining coconut cream and Blue Majik to a large glass. Top with the smoothie mixture and serve immediately.

How to Make Coconut Cream

Refrigerate and store in an airtight container for up to a week.

Why You Should Freeze Your Fruit

Freezing the fruit prior to adding it to the smoothie negates the need for a lot of ice. It keeps it from watering down the smoothie too much. This enhances the flavor since less water is used and gives it a thicker frozen texture.

How to Prep this Smoothie Ahead of Time

Portion out ingredients into resealable bags and freeze until ready to use. In this case I recommend whipping the coconut milk and storing it in a mason jar or other airtight container. Then portion out the avocado, banana, pineapple, vanilla and collagen. Add the remaining ingredients just before blending.

To Serve as A Smoothie Bowl

Serve this recipe as a smoothie bowl. I recommend reducing the amount of almond milk added to ½ cup for a thicker smoothie consistency. Blend as directed below and pour into a bowl rather than a glass and top with ½ cup granola and sliced fresh fruit like additional banana, apples and strawberries.

If you enjoy this coconut cloud smoothie recipe, I recommend checking out these: 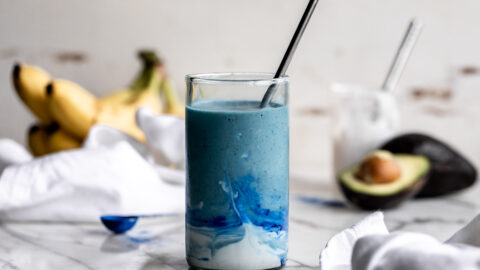