Prep Time: 15 mins
Cook Time: 10 mins
The base of this dish is Greek yogurt which is whipped together with a bit of olive oil and freshly grated Pecorino Romano, providing a light and airy cheese dip.

The base of this dish is Greek yogurt which is whipped together with a bit of olive oil and freshly grated Pecorino Romano, providing a light and airy cheese dip.

I was in New York City last week and I met a few friends for dinner at Vic’s, an Italian restaurant in the downtown area of Noho. The atmosphere was wonderful, as, like most other NYC restaurants and bars, Vic’s was heavily decorated for the holiday season. My friend had chosen the restaurant because he described one dish he had as “orgasmic”. He told me tales of a light and airy whipped pecorino dip served with toasted bread for dipping.

More About This Recipe

In this recipe I serve it with a quick garlic bread with a bit of lemon juice added to brighten up the bread and complement the dip. If desired make the dip a day in advance and store it refrigerated in an airtight container, then drizzle with the olive oil and top with the crumbled pecorino just prior to serving.

The tangy flavor of the greek yogurt complements the Pecorino cheese in this easy appetizer. I use plain full-fat Greek yogurt in this recipe, labeled as 5% fat. Any less can be a bit watery.

Pecorino Romano is unlike the soft cheeses typically used for dips, ricotta for example. Instead, it is a hard, salty Italian cheese made from sheep’s milk. I was immediately intrigued, and the dip lived up to expectation. It was served with bread and we promptly ordered a second round of to scrape up the remaining dip that clung to the bowl.

Just a touch of olive oil adds a bit of richness to this recipe.

Instructions for this easy dip

Whip together the Greek yogurt and Pecorino Romano. Pulse then add olive oil and continue to pulse until smooth.

Make the garlic bread. Cut each half of the bread into 2” pieces on the bias and arrange on a baking sheet.

Heat a small saucepan over medium-low heat, add the olive oil and heat through.

Drizzle the butter over the bread then broil until crispy and golden brown.

Heat the oil and fry the shallots until golden brown.

Add the dip to a serving bowl. Drizzle with the remaining olive oil and crumbled cheese then top with the crispy shallots. Serve with the bread for dipping. 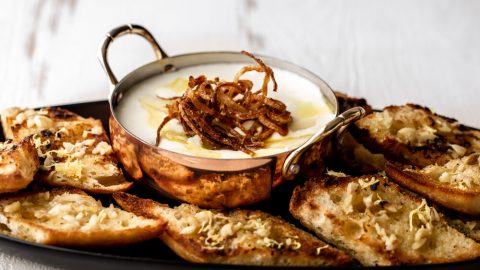 For the whipped pecorino:

For the lemony garlic bread:

For the whipped pecorino:

For the lemony garlic bread: