Prep Time: 10 mins
This summery salad is filled with grilled chicken thighs, squash and tomato with herby basil vinaigrette topped off with creamy burrata over a bed of lettuce.

This dish screams summer to me – from the grilled fresh vegetables straight from a local farm stand to the creamy, rich burrata cheese, herby vinaigrette and tender grilled chicken thighs seasoned simply with salt and pepper. This grilled veggie salad has everything you want in a meal all in one so no need to make any additional dishes.

The chicken can easily be either omitted entirely or substituted with your fish of choice though I love the extra addition of protein it adds to this salad.

Summer may be my favorite season for produce with fresh sweet corn, juicy tomatoes and plenty of squash. I think it’s because so many of the vegetables stand up well to grilling; the method enhances the natural flavors while adding a slightly smoky taste. Summer vegetables also remind me of growing up in New Jersey – named the “garden state” for a reason. My town had an abundance of farms and farm stands to purchase the ripe produce – word would travel fast as to when the corn was best and tomatoes at their peak.

Boneless, skinless chicken thighs are the best for grilling. They are much more tender than chicken breasts though they can easily be swapped in this recipe.

While this mini summer squash is so cute it can be difficult to find so I recommend substituting it with sliced zucchini or summer squash which is in season during the summer months and can be found at most grocery stores.

The corn in this recipe is grilled before it’s cut off the cob and tossed with the rest of the salad. I prefer to buy corn in the husk and shuck it myself so it’s freshest. Peel back the husk to inspect it for any irregularities. Look for sweet corn with kernels in even rows.

This green has a distinct, peppery flavor that pairs well with tomato and burrata. It can be substituted with butter lettuce or romaine in this recipe.

Burrata, a soft cow’s milk cheese from Italy, is essentially mozzarella filled with a creamy interior.

Basil leaves stay freshest when they’re on the plant so I recommend growing your own or getting a potted basil plant from the grocery store. Simply pinch the leaves off at the stem. Chop the leaves just before adding them to the dressing so they don’t turn a dark green.

Whisk together the basil vinaigrette and set aside until ready to use.

Season chicken with salt and pepper and drizzle with olive oil. Add chicken to the grill and cook through. Remove and let the chicken rest. Chop and set aside.

Grill the veggies on foil.

Cut the corn kernels off the cob.

Add the arugula to a large salad bowl with the corn kernels, squash, tomatoes and the chicken. Drizzle with the basil vinaigrette, tossing to combine. Top with the burrata and serve.

If you enjoy this heirloom tomato and grilled veggie salad, give these recipes a try: 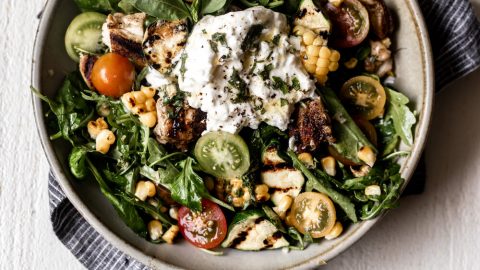 For the basil vinaigrette:

For the vegetables and assembly:

For the vegetables and assembly: