Prep Time: 20 mins
Cook Time: 30 mins
When the Taco Bell cravings hit, sometimes nothing else will do!

While I love a Taco Bell trip as much as the next person, I prefer to make versions of my fast food favorites fresh at home using high-quality ingredients. I’m sharing a copycat recipe of the famous Taco Bell Chalupa supreme (the best thing on the menu) that you can easily make at home. Chalupas have busts of flavor and contrasting flavors in every bite and make great appetizers or snacks.

The chalupas is a specialty of South-Central Mexico. Traditional chalupas are made by shaping masa dough into the shape of a boat and frying it. The flat fried dough is topped only with salsa cheese and shredded lettuce.

The Americanized Taco Bell chalupa supreme is much more like a fried flatbread and taco hybrid. Making the fried shell only requires a few pantry staples, plus some oil to fry them in. As long as you have the ingredients to make the shell the fillings are flexible!

This recipe is for an at home version/ copycat Taco Bell chalupa supreme. Their shells are similar to a flatbread – shaped into a taco shell and filled with ground beef and toppings. The shell for this chalupa recipe is a version of Native American fry bread (also called Navajo fry bread) which I discovered and fell in love with on a camping trip in Arizona with my brother. I shape the dough into the size of a small tortilla and fry the disc of dough, making the taco shell. The fried bread is similar to a flat funnel cake and the closest thing I have found that resembles the thin, bready crust of Taco Bell’s chalupa bread.

Key Ingredients in this Recipe

I use a blend of 80/20 ground beef for this Taco Bell chalupa recipe, which means it’s 80% lean  beef and 20% fat. The fat adds flavor though it can be swapped for a leaner cut. Fresh is best, try asking your butcher to grind it for you.

I prefer to make my own seasoning mixture for the ground beef so I have more control over the flavor using spices I already have in my spice cabinet. This “taco seasoning” is made with chili powder, paprika, salt, cumin, coriander, and cayenne. Substitute with 1 tablespoon + 1 teaspoon of store-bought spice mix.

I add a bit of cornstarch to the seasoning mixture to help thicken the beef and bind the spices to the meat.

While lettuce isn’t traditionally included in a taco, shredded iceberg lettuce adds a crunch to this recipe. Swap with shredded romaine lettuce if needed (though it can be harder to pile into the shell).

Colby Jack cheese is similar to a mild Cheddar cheese with a creamy texture and tangy flavor. Try swapping the Colby Jack with another semi-hard cheese like Cheddar, Monterey Jack or Pepper Jack for a bit more of a kick.

Instead of topping the chalupas with pico de gallo I use chopped tomatoes for a simple, fresh element. I like using Roma tomatoes though any variety will work.

I use all-purpose flour in this recipe. It’s a versatile flour and can be used in most baked/ fried recipes. While self-rising flour already has baking powder added to it, I prefer to use all purpose and add my own.

The cool sour cream offsets the seasoned beef and adds a creamy element to the chalupa while helping to bind the layers of toppings together in the shell. For a lighter take, swap the sour cream with Greek yogurt.

Add the flour, baking soda and salt to a medium mixing bowl, whisking to combine. Stir in the vinegar and milk until a shaggy ball forms.

Turn out onto a lightly floured, clean work surface. Knead until the dough comes together then divide into 8 equal pieces (about 75g each).

Step 3: Roll out pieces of dough

Fill a cast iron pan with enough oil to reach 1½” up the side. Heat oil over medium heat to 325ºF. Roll each ball of dough out into a 6” circle.

Working one at a time, slowly and carefully add one of the pieces of rolled out dough to the hot oil. Fry until the underside is golden brown but not too crispy or else the wrapper will not fold, about 30 seconds.

Step 5: Shape into a shell

Flip and fold into a taco shell, frying for an additional 30 seconds on each side.

Step 6: Remove to a paper towel

Remove the fried bread to paper towels to drain. Repeat with the remaining dough.

Tips and Tricks for How to Make Chalupas At Home

Variations/ Substitutions  for this Recipe

Tips for Making the Chalupa Shells

The chalupa shells are best served fresh! They can be reheated under the broiler or in an air fryer set at 350ºF (180ºC) for about 3 minutes.

Can I eat chalupas flat?

Yes! If you are ok with eating them flat then it will be much easier to fry the dough. Build chalupas with toppings as you would a tostada and enjoy!

If you enjoy this recipe, I recommend checking out these: 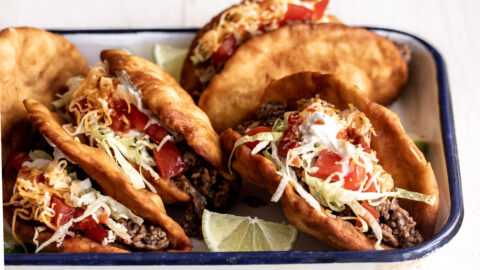 For the chalupa shell:

For the spiced ground beef:

For the chalupa shells:

For the spiced ground beef: