Prep Time: 40 mins
Smashed cucumbers are tossed in a simple soy and rice vinegar dressing for a refreshing side salad.

The cooling elements of this refreshing Chinese cucumber salad, pai huang gua, make it a perfect accompaniment for rich, spicy dishes. Smashing the cucumber into bite-sized pieces helps to release the seeds and remove excess water while helping the dressing adhere.

There are numerous versions of this simple Sichuan-style salad, some using whole dried chilies, Sichuan peppercorns, chili oil or black vinegar. A Korean version is made with sliced cucumbers and gochugaru (Korean red pepper flakes). A Japanese version, called sunomono, is made with sliced cucumbers in a similar sauce and sometimes with togarashi (a chili powder spice mixture).

How to Make Smashed Cucumber Salad

Add the cucumber pieces to a colander and toss with the salt and sugar. Let sit for at least 30 minutes to let the cucumbers drain.

Add the cucumbers to a large bowl and toss with the dressing. Top with the sesame seeds and cilantro and serve.

I love serving this recipe as a vegetable side dish with these recipes:

If you enjoyed this smashed cucumber salad recipe, I recommend giving these a try: 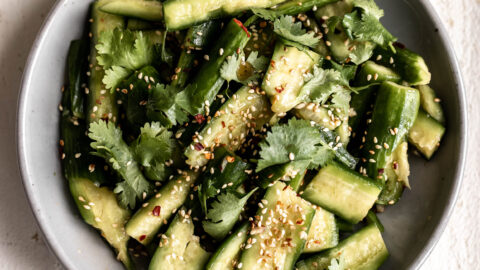