Prep Time: 25 mins
Crisp sliced cucumber is served in a creamy dressing made from a thinned out sour cream vinegar mixture, and tossed with fresh dill, salt and pepper.

There are plenty of different variations on creamy cucumbers in plenty of cuisines like Greek tzatziki. In Germany this combination is called Gurkensalat and is commonly served as a component of a salad plate called Salatteller. Some German cucumber salad recipes are made with oil and vinegar as the base while others, like this, are made with a creamy dill dressing.

More About This Recipe

This creamy cucumber salad is extremely easy to make from ingredients you probably already have in the fridge. It’s served chilled, making it a perfect pairing for the warm summer months. Cucumber salad can be made ahead of time which creates a refreshing side dish alongside simple grilled or roasted chicken, fish, or fried crispy schnitzel like this pork recipe here. My mom used to make a similar salad when I was growing up and even as a picky eater I always went for seconds.

Adding a bit of salt and sugar to the sliced cucumber an hour or so before serving removes some of the additional water from the vegetable and keeps it from watering down the salad later. This also helps to bring out the subtle flavor of the cucumber and slightly pickles it. Cucumber is a hydrating vegetable – it contains a high percentage of water with antioxidants and nutrients, but with few calories.

How to Make Creamy Cucumber Salad

If you enjoy this creamy cucumber salad recipe, I recommend checking out some of these: 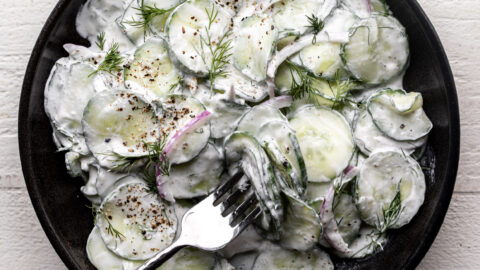