Prep Time: 10 mins
Cook Time: 1 hr 30 mins
The sauce for the pasta is similar to lobster bisque, a creamy smooth sauce flavored with seafood stock and aromatics served over bucatini.

The sauce for the pasta is similar to lobster bisque, a creamy smooth sauce flavored with seafood stock and aromatics. And if you don’t know how to cook lobster tails? Don’t worry it’s easier than you think. The sauce is tossed with tender lobster meat from cooked tails and served with bucatini or a different noodle of your choice that pairs well with a creamy sauce such as wide flat noodles like pappardelle or fettuccine. Creamy lobster pasta is always a crowd pleaser recipe – it’s one of my most requested recipes from friends.

More About This Lobster Pasta Recipe

The recipe is inspired by the lobster pasta special at Taverna Tony, a well-known Greek restaurant in Malibu, California. Malibu is known as an upscale beach town but it also happens to be where I went to college. My freshman year of college when I felt I needed a reward or a break from cafeteria food I would drive down to Taverna and order this recipe to go. Since it was such a large serving I could make it last for three separate meals. Its considered a special item on their menu and every time we go my mom gets nervous that they may not have it… they always do. It’s been that way for the last 8 years.

The thyme is used to add a slight flavor to the bisque sauce.

This herb has a subtle licorice flavor that pairs really well with seafood like lobster. I also use it in lobster pot pie.

The combination of carrots, onion and celery is referred to as mirepoix. This aromatic combination of vegetables is a classic base for soups and recipes like this.

The tomato adds a subtle flavor and color to this recipe. I use a combination of fresh tomatoes as well as a more concentrated tomato paste.

I like serving this pasta dish with bucatini pasta, a thick spaghetti-like noodle with a whole in the middle, because it holds the light seafood sauce well and some gets inside the noodle as well.

Sherry and brandy are both used to enhance the flavor of soups.

Fish stock, also called seafood stock is made from simmering the shells of lobster, shrimp, crab shells or other fish bones with white wine and other aromatics. I often buy seafood stock though you can easily make your own – especially if you cook whole lobsters for this recipe.

Add the tomato, garlic, thyme, tarragon, bay leaves, peppercorns, brandy and sherry, stirring, until almost all liquid is evaporated, about an additional 5 to 8 minutes.

Stir in the fish stock and simmer the mixture on medium-low heat, uncovered, stirring occasionally, until the mixture has reduced by about half.

Poach the lobster tails in a pot of boiling water. Remove them from the water and set aside to cool. Remove the meat and chop.

Remove the pot from the heat and pour the stock mixture through a fine sieve into a large saucepan. Whisk the tomato paste into the strained broth then whisk in the cream.

Simmer until the broth is slightly thickened. Turn the heat down to low heat and season with salt and pepper. Begin to whisk in the butter one cube at a time until it has all been added to the sauce. Add the lobster meat, stirring to combine.

Bring a large pot of salted water to a boil. Add the pasta and cook, stirring occasionally, until al dente, about 10 minutes. Drain and return the pasta to the pot.

Ladle in the enough of the sauce to lightly coat the pasta and serve.

How to Cook Lobster tails

To cook fresh lobster tails you simply bring a large pot of water to a boil and add the raw tails and cook for about until the meat is no longer opaque, about 8 to 12 minutes then remove from the pot and let cool. There are two different ways to break down lobster tails from here:

If you enjoy this creamy lobster pasta recipe, I recommend checking out some of these: 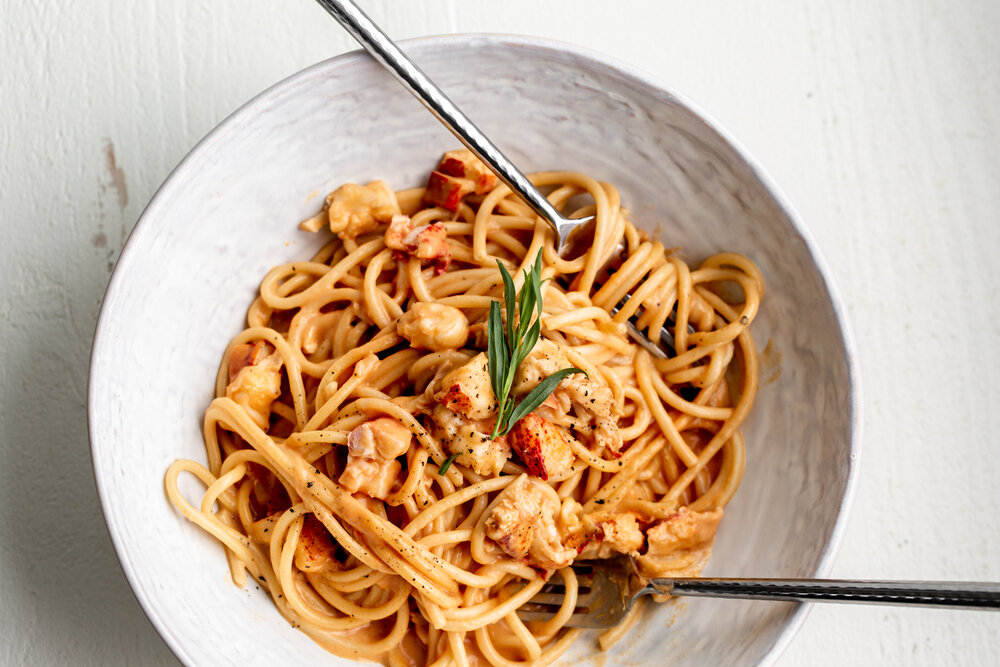