Prep Time: 5 mins
This cocktail comes together with almond-flavored amaretto, bourbon for a bit more body, citrus - giving it the "sour", egg whites for foam and sweetener.

I’m not going to lie. I used to make fun of my mom for drinking amaretto sours – I thought of it as the sickly sweet cocktail made with store-bought mix. Then one night at dinner at the Grey restaurant in Savannah, Georgia, the bartender made us an amaretto sour recipe made with egg whites, one of my favorite components of craft cocktails. It adds a more complex layer!

The goal of this classic 70’s cocktail is a smooth, well-balanced drink, not an overly sweet drink. The ingredients are first shaken without ice for a “dry shake” so they combine and the egg has a chance to froth. Then ice is added and it’s shaken once more. I also strain the cocktail using a fine mesh strainer like this one for the best texture.

How to Make an Amaretto Sour

Tips and Tricks in This Recipe

In a small saucepan over medium heat, whisk together sugar with 1 cup of water until the sugar has dissolved. Bring to a boil then lower heat to medium-low and simmer until thick and syrupy, about 15 minutes. Remove from heat and let cool completely.

How to Make This Cocktail Vegan

While an egg white creates the foam that forms on the top of this cocktail recipe, the recipe can easily be made vegan. Rather than egg whites, use 2 tablespoons of aquafaba – the liquid left over from cooked chickpeas. Simply drain a can of chickpeas and reserve the liquid.

Are amaretto sours shaken or stirred?

Amaretto sours are shaken so the egg white becomes frothy and foamy while the drink is throughly combined and chilled.

Can you use whiskey sour mix for amaretto sour?

Sure, but I much prefer making the recipe from scratch with a few handy ingredients as detailed below. It’s much less sugary than a store-bought mix and has more complex flavor.

I add bourbon to my recipe to give it a bit more of a punch. Disaronno, a popular amaretto liqueur brand is 28% alcohol or 56 proof. For comparison bourbon is 40% alcohol or 80 proof.

If you enjoy this amaretto sour recipe, I recommend checking out these: 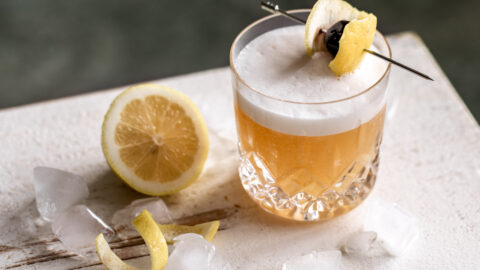 *Note: Egg whites are not recommended to be consumed by infants (but neither is alcohol), pregnant women or the elderly. Swap with aquafaba for a vegan alternative.

*Note: Egg whites are not recommended to be consumed by infants (but neither is alcohol), pregnant women or the elderly. Swap with aquafaba for a vegan alternative.