Prep Time: 6 hrs
Cook Time: 4 hrs 30 mins
A Cuban sandwich combines citrusy, tender roast pork with sliced ham, mayonnaise, mustard, Swiss cheese and pickles, which are then pressed on a baguette until the buttery bread is golden and crisp.

This Cuban sandwich recipe combines citrusy, tender roast pork with sliced ham, mayonnaise, mustard, Swiss cheese and pickles, which are then pressed on a baguette until the buttery bread is golden and crisp. While I am not always a fan of pickles or mustard, there’s something about all the ingredients together that makes my mouth water. I love any variation on a ham and cheese sandwich – like this American monte cristo or French croque madame. This sandwich is extremely popular in Florida, created in areas with Cuban communities to cater to workers.

What’s in a Cuban Sandwich?

Ingredients in a Cuban Sandwich

The roast pork is marinated in a citrusy combination to infuse the pork with flavor. It’s hand sliced before it’s added to the sandwiches and can be made a few days in advance.

I use dill pickles in this recipe though bread and butter pickles instead.

Mayonnaise helps to keep this sandwich moist. As the sandwich is pressed the mayonnaise seeps into the crisp bread.

A crusty bread won’t press as well as a loaf of Cuban bread or French bread. Cuban bread is a fairly simple white bread though it often contains lard. Look for bread with a thinner crust so that as it presses the outside remains crisp but the juices from the roast pork don’t seep though and make it soggy.

Steps to Make a Cuban Sandwich

Make the marinade for the pork, blending the ingredients together.

Preheat the oven. Place a rack in a roasting pan and add the meat. Roast until cooked through and tender.

Let the meat rest for about 30 minutes before slicing. Thinly slice the pork and set aside.

Slice the bread in half to create rolls then slice in half again.

To assemble the sandwich, layer 3 slices of the roast pork followed by slices of ham, Swiss cheese, and pickles.

Butter the bread and add to a panini press. Press the sandwich until the cheese is melted and the bread is golden brown, about 4 minutes each side.

Remove and cut the sandwich in half. Serve immediately with extra pickles and potato chips.

How to Make a Cuban Without a Panini Press

This sandwich requires a panini press or, if you don’t have a sandwich press then use another skillet stacked on top of the sandwich as a weight to press it cooked in a cast iron pan. Flip the sandwich half way through cooking. While traditional Cubans don’t include mayonnaise I like to add a little bit to my hot sandwiches because it melts into the bread and keeps everything moist. 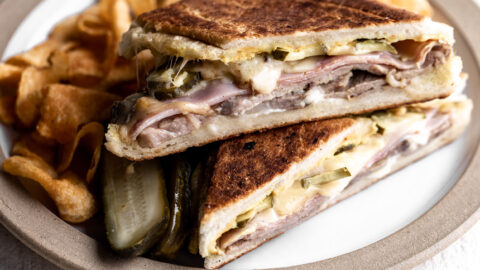 For the mojo marinated roast pork:

For the Cuban sandwiches:

For the mojo marinated roast pork:

For the Cuban sandwiches: