This is the perfect summer sandwich – great for outdoor poolside entertaining. Tender braised pulled pork sandwiches are served topped with homemade orange BBQ sauce. I kick this classic sandwich up a notch with the addition of crispy onion rings, sharp cheddar cheese and crunchy hickory smoked bacon on rich brioche buns. In this recipe, I use both Swift Meats pork and Swift’s Hickory Double Smoked Thick Cut Bacon. Swift Meats is committed to quality as well as sustainability. Their goal is to reach net zero greenhouse gas emissions by 2040.

This Swift Meats petite pork roast cut comes from the shoulder area of the pig and is a great source of protein. It can also be referred to as the pork shoulder, picnic shoulder or picnic ham. Because this cut gets a lot of work, it is a very muscle-heavy cut, making it ideal for braising. Slowly cooking the meat at a low temperature helps to break down the tough meat, resulting in tender, succulent pork.

Why You Should Braise Your Meat

Braising is the method of cooking meat at a low temperature for a long period of time in a tightly sealed container like a Dutch oven. It’s a forgiving method of cooking. Slowly cooking the meat allows for tough, lean (and often cheaper) cuts of meat to break down and become tender and juicy. I love a good braise because you really can’t mess it up. With this “hands-off” method, the meat is first seared to lock in the juices. It’s then added to a tightly covered oven-safe pot. Cook it for a long time at a low temperature, so you don’t run the risk of overcooking as you would using other methods. 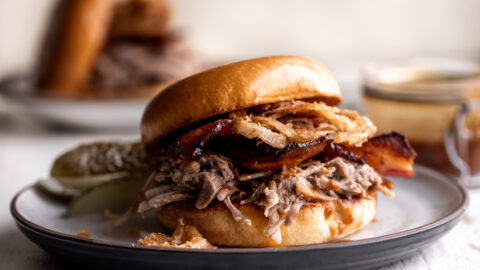 For the orange BBQ sauce:

For the onion rings:

For the orange BBQ sauce:

For the onion rings: