Prep Time: 5 mins
Cook Time: 10 mins
This sweet and savory, decadent American sandwich is like a cross between French toast and a croque madame. It’s a more exciting take on a ham and cheese sandwich and is perfect for breakfast, lunch or dinner.

In this monte cristo sandwich recipe layers of bread filled with ham, turkey and cheese dipped in an egg batter and pan-fried or deep fried and served topped with powdered sugar and sticky raspberry jam. While it seems fancy, this sandwich comes together quickly with fairly basic ingredients. I always have some deli meat like ham and turkey in the fridge for snacking or last minute sandwiches. Monte cristo’s are great for both breakfast or lunch.

After extensive research it seems most food historians agree that the monte cristo originated in France as a simplified version of the croque monsieur (or madame). Since then versions of the sandwich became popular in the 1930’s to 60’s appearing in cookbooks titled as a “French sandwich”. It wasn’t called a “Monte Cristo” until it appeared in Disneyland’s cajun-themed restaurant, Blue Bayou, in the 1960’s.

What’s in a Monte Cristo sandwich?

How to make a Monte Cristo

Tips for the best Monte Cristo

If you enjoy this recipe, I recommend checking out these: 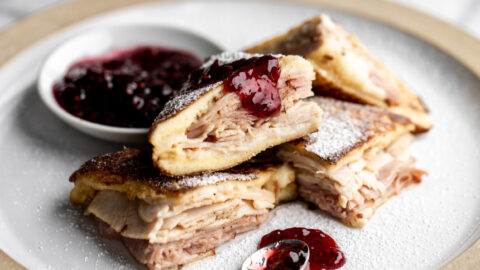