Prep Time: 20 mins
Cook Time: 10 mins
Sautéed juicy shrimp marinated in a tomato and chili sauce served on their own, in tortillas or over a bowl in this quick and easy recipe.

In this Mexican dish, fiery shrimp are marinated and cooked in a spicy homemade chili and tomato sauce. Diablo shrimp, also known as “camarones a la diabla” translates in English to “deviled shrimp”. As the name implies it’s spicy – the heat of the sauce is balanced by the sweet, light flavors of shrimp.

While this quick and easy dish has deep, rich flavors, it comes together for a weeknight meal. The sauce is made with a base of rehydrated guajillo chilies and chiles de arbol, sautéed onions, diced tomatoes and lime juice blended and used as a marinade for the plump, juicy shrimp.

Seafood is not prevalent in all types of Mexican cuisine since many regions are landlocked. However, with over 6,000 miles of coastline, pescado (fish) and seafood (mariscos) are frequently found in regional coastal Mexican cuisines. Camarones la diabla is a specialty from Veracruz on the Gulf of Mexico.

This recipe is great for anyone who loves spicy food though it isn’t overpowering since it’s mixed with onions and diced tomatoes to help cut the heat! It can be served on its own alongside rice or with bread for soaking up the sauce, with fresh, warmed corn tortillas or even over pasta for a twist. It’s easy to prepare, making it great for weeknight dinners or special occasions. The sauce can even be made a few days ahead of time so the shrimp can be quickly marinated and cooked for a 30 minute dinner.

Make the marinade/ sauce. Sauté the onions then add the chicken stock and tomatoes and bring to a boil. Add the chilies to rehydrate and simmer, stirring occasionally.

Bend the sauce until smooth.

Add the shrimp to a large bowl and pour the sauce over the top. Let marinate for 10 minutes.

Cook the shrimp in a skillet over medium high heat. Reduce the remaining marinade

How to Serve this Recipe

How long should I marinate shrimp?

While meat can and should be marinated for an hour or longer to let the flavors really sink in, shrimp and other seafood don’t need to marinate that long. This tomato and chili sauce is fairly acidic so marinating it any longer than 30 minutes will cause it to become gummy. It’s a great recipe because the flavors come together so quickly.

Can this be made ahead of time?

I would recommend making the sauce ahead of time but wait to combine the sauce with the shrimp until just before you are ready to cook the recipe. The sauce can be made up to a few days in advance and stored refrigerated in an airtight container.

How spicy is this recipe?

While the name is intimidating I made this recipe with a moderate spice level in mind. If you really like spicy food then double the chilies used for a really hot dish.

Can I substitute the chilies with red pepper flakes?

This is not a dish where you can substitute crushed red pepper flakes for the complex flavors of guajillo and chiles de arbol. Chilies can be found on the ends of aisles at a lot of grocery stores or near the spices or other “Latin” ingredients. They can also be ordered online from places like Amazon. 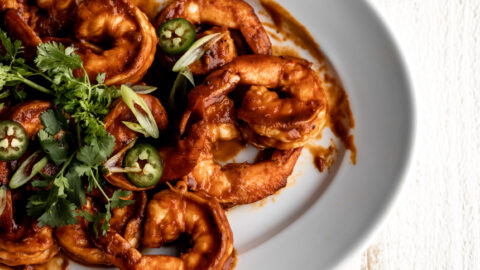