While American versions of an eggplant Parmesan recipe are classically served with slices of fried eggplant with marinara and mozzarella alternately layered in a baking dish, I hate how the eggplant gets soggy in the casserole iteration. What’s the point of frying if it will just get soggy before serving? When baked to melt the cheese, the sauce ends up turning the breading to mush, mashing up what should be varying textures.

I had a similar appetizer version of this portioned, layered eggplant Parm at Emmy Squared on the Upper East Side of Manhattan. I loved the way they stacked the eggplant slices rather than layering it so that each bite was crispy, saucy and cheesy. While not the classical preparation I think this is the perfect way to create individually portioned entrees with contrasting textures topped off with buttery portions of burrata.

In this recipe I use Globe eggplant, it’s the typical oblong eggplant found at most grocery stores. I opt for medium ones so that they aren’t too big when layering them. Thin Japanese or Chinese eggplant or Graffiti eggplant (also known as Sicilian eggplant) work great in this recipe too and can be easily swapped out. The slices of eggplant are seasoned with salt (rather than salt and pepper since the pepper is added to the breadcrumbs) to draw the moisture out of the eggplant before they’re fried so they don’t get mushy.

Panko, or Japanese breadcrumbs, are light and airy. They absorb less oil than Italian breadcrumbs which makes for a crisp, crunchy texture. The Panko mixture is seasoned with Parmesan, red pepper, garlic powder and black pepper and ground fine so that it coats the eggplant more evenly.

The addition of Parmesan cheese to the coating adds flavor and as the eggplant is fried the Parmesan melts into the breading and works to keep the Panko adhered.

The typical American buttermilk is low-fat and is ideal for adding a tangy flavor and frying the slices of eggplant.

Because the eggplant part of the recipe takes a bit of attention, using a jarred tomato sauce certainly makes things easier though if you have the time I love being able to make my own from scratch since it’s very easy. I typically use this recipe for marinara here. This sauce has a great flavor – made with whole peeled tomatoes, diced tomatoes, onion and garlic cloves. Simply blend it for a smoother sauce.

I love topping dishes with creamy burrata cheese. Burrata, a soft cow’s milk cheese from Italy, is essentially mozzarella filled with a creamy interior. It is served cold over the dish rather than melted and adds an additional creaminess that contrasts really well with the tomato sauce and crispy eggplant. If you can’t find burrata cheese it can be substituted with slices of fresh mozzarella but since it’s not as creamy I’d recommend broiling the dish once more so the mozzarella melts over the eggplant and tomatoes.

Vegetable oil is a neutral oil with a high smoke point, making it ideal for frying. Since the eggplant is shallow-fried in a pan you can substitute a richer oil like olive oil.

How to Make Eggplant Parmesan

How to Make the Eggplant in the Oven

While it is ideal to fry the eggplant so it gets crispy and golden brown all over before the slices are layered you can bake the eggplant in the oven if desired.

Heat the oven to 400 degrees Fahrenheit. Arrange the slices of coated eggplant on a baking sheet in an even single layer and drizzle with about 1/4 cup of oil. Bake until crispy on both sides, flipping the slices half way through cooking, about 30 to 40 minutes. Continue with the recipe as directed below. 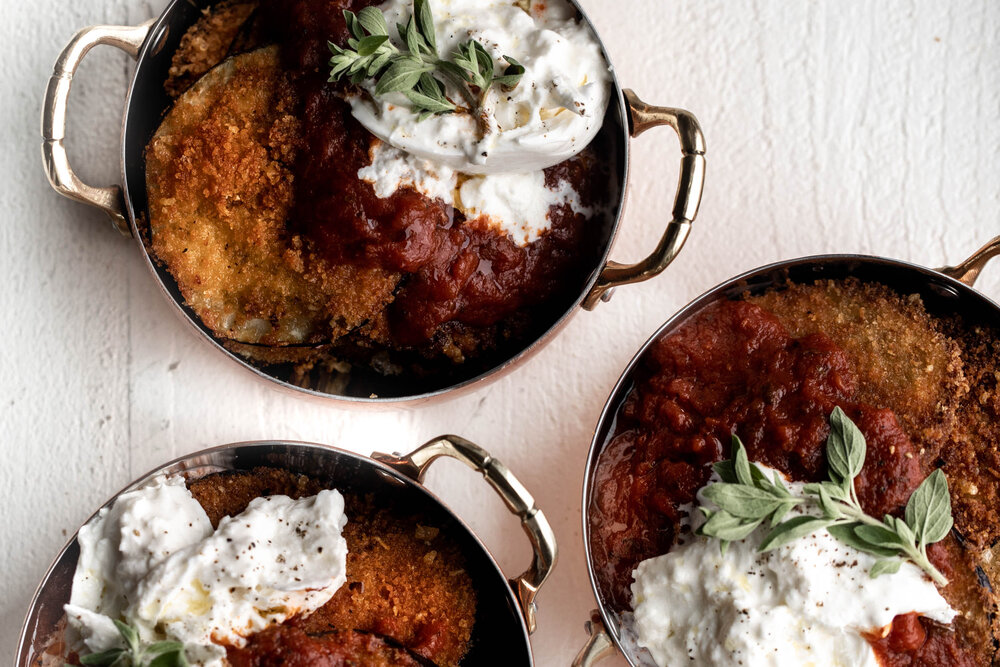