Prep Time: 10 mins
Cook Time: 10 mins
Mozzarella en carozza is like when a mozzarella stick meets a grilled cheese sandwich, but this simple recipe, made with humble ingredients, is much easier to make than mozzarella cheese sticks.

Slices of part-skim mozzarella are sandwiched between slices of buttered bread coated in panko breadcrumbs and pan-fried until a golden-brown crust develops and the cheese becomes melty. I add additional flavor to the crust by adding lemon zest and garlic powder.

This melty cheese sandwich comes from Southern Italy, specifically the area of Naples and the term  “en carroza” in Italian translates to “in carriage” in English.

I have found differing histories behind the name mozzarella in carriage. One is that when the halves of the sandwich are pulled apart the gooey strings of cheese resemble the reigns of a horse and carriage. Another is that the sandwich is traditionally made with Neapolitan bread, and that its shape resembles the wheels of a carriage. Originally the recipe was created to make use of stale bread and leftover mozzarella.

I’m sharing a recipe as well as tips and tricks on how to successfully create a traditional mozzarella en carozza.

While I prefer using part-skim cheese because the low-moisture, dry, rubbery texture melts better though fresh mozzarella has a softer, more buttery texture. It doesn’t melt as well but the flavor is great so you can always give it a try in this recipe! It also doesn’t last as long in the fridge. Low-moisture cheese can be kept for much longer making it for an easily accessible snack.

This is the way that I make mozzarella en carozza. The sandwich bread requires no forethought and white sandwich bread is a great side for this recipe. It’s slightly smaller than other bread.

As mentioned before this recipe was originally created to make use of stale bread. When you use stale bread it absorbs the egg mixture, softening the bread and crisps up well when it fries.

Italian bread crumbs can be used in the place of panko bread crumbs in this recipe. I prefer using panko because it absorbs less oil and gives the recipe a light and airy crunch. If you use this then I’d recommend first coating the bread in flour before the egg mixture so it gets crispier.

I use part-skim, also called low-moisture mozzarella in this recipe. Fresh mozzarella has a higher water content and it becomes runny rather than gooey as it melts. If you can’t find deli-sliced mozzarella choose a block of part-skim mozzarella and cut it into ⅛”-thick slices.

White bread works best for this recipe. The size of white sandwich bread is perfect for this appetizer while the airy texture works to soak up the egg mixture so the panko sticks well. If you use thick slices of bread it will take much longer for the cheese to melt on the inside while the outside browns too quickly.

Unless noted otherwise, I use unsalted butter in my recipes. I find the amount and type of salt can be controlled and added as needed. The butter helps to hold the sandwich together before frying.

Panko, or Japanese breadcrumbs, are light and airy. They absorb less oil than Italian breadcrumbs which makes for a crisp, crunchy texture.

the lemon zest is the grated outer skin from the lemon. Use a zester or microplane to remove the zest. If you don’t have a zester use a paring knife or vegetable peeler to remove the rind and finely chop it.

Ground and dried garlic powder has a much more mellow taste and aroma than fresh garlic.

The pecorino romano adds additional flavor to the sandwich and melts into the outer coating.

The bread is coated in a simple egg batter. The eggs should be whisked until they are smooth and fall like ribbons from the whisk.

I fry the sandwich in vegetable oil rather than olive oil because it has a higher smoke point and neutral flavor.

It’s more of a personal preference, but I like to use flat-leaf parsley rather than curly parsley.

Use my homemade recipe here or warm a store-bought sauce in a pinch.

Get all your ingredients set up before you begin cooking to make the process easier. The method for making them is somewhat similar to a monte cristo sandwich. The mozzarella is sandwiched between slices of sandwich bread then coated in egg followed by panko and fried until golden brown. 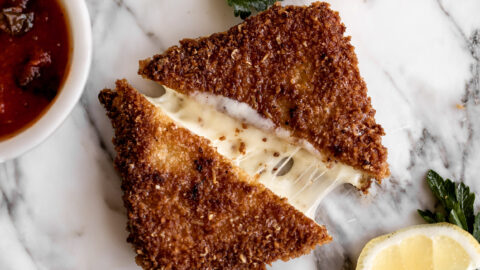