This dish makes for a wonderful lunch or dinner. It’s easy to prepare, vegetarian, vegan and naturally gluten free (as long as you use tamari rather than soy sauce). This recipe is not a traditional preparation of Japanese soba noodles but it makes for a great healthy-ish meal.

What are soba noodles?

Soba are a type of Japanese buckwheat noodles, served chilled or hot in broth or salads. In addition, they have a nutty flavor and a tender texture. The process to make them is notoriously complex though the dried version can be widely found in stores. Since they are made only from buckwheat and water they are naturally gluten free. Some versions of soba noodles are made with a portion of whole wheat flour to help with binding so be sure to always check the label if allergies are an issue. When soba is served chilled as it is in this recipe, adding it to a bowl of ice water quickly stops the cooking process so the noodles don’t overcook.

How do I make crispy shiitakes?

Thinly sliced shiitake mushrooms are simply tossed in vegetable oil, seasoned with salt and pepper, and slowly cooked in the oven at a low temperature for about 25 to 30 minutes total. Cooking them slowly also keeps them from burning as they crisp. When they are ready they should be like vegetarian bacon crumbles (which is how they are used atop By Chloe’s vegan mac and cheese). While it seems like a large quantity of mushrooms to start with – mushrooms are similar to spinach, you start with a ton and end up with a little.

What’s in the dressing?

Though this dressing tastes complex with a creamy, nutty texture and salty, umami flavor, it is made with simple ingredients. Tahini paste, made from sesame seeds, is combined with miso paste, rice vinegar, a bit of soy sauce or tamari and Sriracha for a kick. This dressing goes on anything from noodles (try it over ramen too) to a simple kale salad or over roasted salmon.

Tips for the recipe 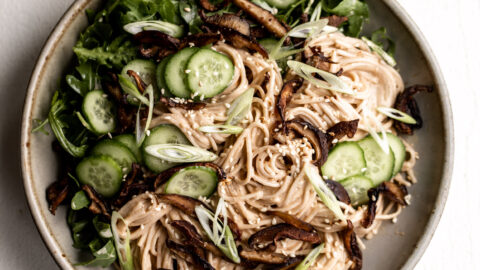 For the tahini dressing:

For the tahini dressing: