The fried wontons take the place of classic tortilla chips in this spin on nachos. I’m not sure why it took me so long to turn wontons into chips but I am so glad that I finally did! They are crunchy but light at the same time making them a perfect snack. This appetizer is definitely going into my rotation when entertaining guests.

The star of this recipe is seared ahi tuna, made using my sesame ahi recipe. To get an even sear on the fish, it is important that the pan is already extremely hot. That way there is a crust on the fish without cooking the inside too much.

When buying ahi tuna look for fresh fish. Even though searing the outside will kill bacteria you still want to use high quality seafood. I recommend asking your fishmonger about the fish – they can advise you on the freshness of the fish. If all else fails the best way to tell the freshness of the fish is by the smell. It shouldn’t smell overwhelmingly fishy. It should have a fairly firm texture and look deep red to pink in color.

How to Make Wonton Nachos

Coat the Ahi tuna in sesame seeds and sear. Cut into pieces and toss in the soy sauce then refrigerate until ready to use.

Cut the wontons in half and fry until crispy and golden brown.

Spread the wontons on a plate and top with shredded cabbage, ahi tuna, and avocado.

Drizzle with the wasabi mayo mixture and sriracha.

Top with the cilantro, green onion and jalapeño peppers then serve.

This is a flexible recipe, meaning you can get creative with what toppings you add over the wontons. 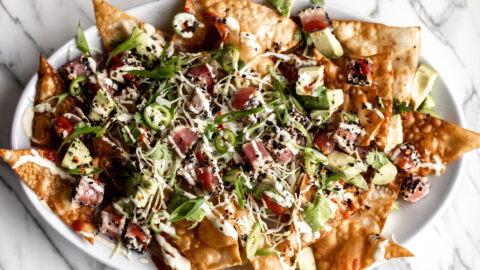