Prep Time: 10 mins
Cook Time: 5 mins
An Ahi tuna steak is covered in black and white sesame seeds then quickly pan seared so the inside remains raw then sliced and served over an arugula salad with a ginger lime vinaigrette.

This seared ahi tuna recipe is a quick meal that comes together in under 30 minutes for an easy lunch or appetizer. When searing the tuna it is important that the pan is already extremely hot so that you get a crust on the fish without cooking the inside too much. You want it to be medium-rare!

Seared tuna is a staple among menus at many fancy restaurants but it is so easy to recreate at home as long as you have high-quality ingredients. This recipe is for sushi lovers and even those scared of eating raw fish. If you are a fan of seared tuna, I’d recommend this ahi poké recipe or ahi tuna wonton nachos.

Tips for your seared ahi tuna

What’s in the dressing?

How to sear ahi tuna

Whisk together dressing in a small bowl and set aside.

Season the tuna with salt then evenly coat the tuna steak in sesame seeds.

Heat your pan until almost smoking then add the vegetable oil and add the tuna.

Sear the tuna on both sides then remove it to a cutting board to let cool.

Slice the tuna steaks into strips.

Toss the arugula with dressing then add to a plate and top with strips of seared tuna and avocado.

Substitution ideas for this recipe 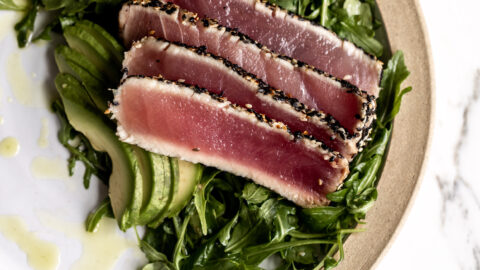 For the seared tuna:

For the seared tuna: