Prep Time: 10 mins
I love this simple pairing for an easy summer dessert.

One of my favorite things about Wimbledon, the British tennis tournament, is the popularity of the combination of strawberries and cream. Sliced, juicy, ripe strawberries are smothered in cream topped off with a little sugar. I like to lightly beat my cream by hand so it’s a little fluffier and add just a touch of Grand Marnier liqueur to amp up the flavor.  I had a Grand Marnier-infused whipped cream over mixed berries years ago at the famed New York steakhouse, Spark’s and have been thinking about it ever since. A small amount of alcohol is used but it really enhances the flavors and complements the berries. Pair with a Pimm’s cup and enjoy some tennis.

The combination of the fruit and cream can be traced back to 1509 when Thomas Woosley served it to England’s Henry VIII. Strawberries are at their peak in July when the tournament is played and when the tournament began in 1877, fresh strawberries with heavy cream were considered the height of luxury in the Victorian era. According to the Wimbledon website, the tennis tournament serves about 191,000 portions of strawberries each year during the 2 week period.

How to Make Strawberries and Cream

Add the heavy cream to a bowl and beat with a whisk until the mixture is lighter and slightly fluffy, about 3 minutes.

Add the Grand Marnier and fold it in with a rubber spatula. Cover and refrigerate until ready to use.

Divide the sliced berries among small bowls and top with the Grand Marnier whipped cream followed by a sprinkle of sugar. Serve immediately.

How to Make This Alcohol-Free

The alcohol-infused whipped cream includes just a touch of liqueur to enhance the flavor. If you prefer to make it without it, simply omit it in this recipe. You can also flambé (safely light the liqueur on fire) to burn the alcohol off before adding it to the cream or replace it with 1 teaspoon orange zest if you wish to add an orange flavor.

Strawberries and cream is served at the tennis tournament, Wimbledon with only (you guessed it) strawberries. You can also make this recipe with a combination of berries including raspberries, blueberries or blackberries.

If you enjoy this strawberries and cream recipe, I recommend checking out these: 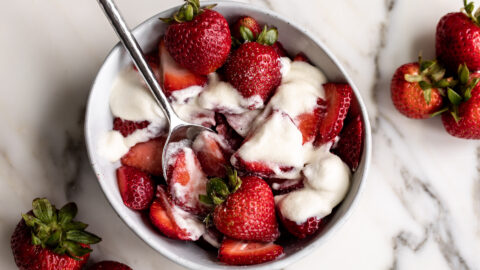