This easy fall salad makes the most of seasonal ingredients like Brussels sprouts for a healthy vegetarian salad or a side everyone will love. I combine the shaved sprouts with thinly sliced Tuscan kale for a more hearty recipe. The salad is tossed in a simple lemon vinaigrette, topped off with Parmesan, toasted walnuts and dried cranberries.

Because both kale and Brussels sprouts can be on the tougher side when served raw, I massage the dressing into the greens before adding the additional toppings. This helps to tenderize the salad.

How To Shave Brussels Sprouts For Salad

How to prepare the Brussels sprouts for shaving

What tools to use

While I typically opt for a mandolin to make the shredded Brussels sprouts, you can also do this in the food processor.

How to properly shave Brussels sprouts

To grate Brussels sprouts in a food processor, simply attach the grater blade to the top and drop the vegetables in. They won’t be as even but this is a great way to do it when making a bigger serving, especially for entertaining.

To shave them using a mandolin carefully and slowly shave them. 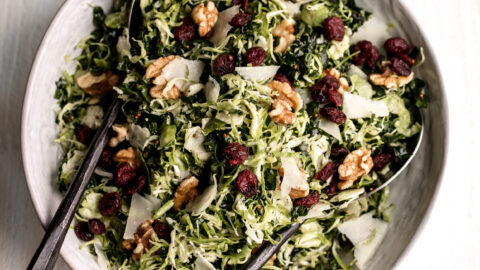 For the lemon vinaigrette:

For the lemon vinaigrette: