Slowly roasting your summer cherry tomatoes in olive oil is a great way to preserve summer at its peak! Of course I usually go through tomato confit (or confit tomatoes) right after I make them! In addition to spreading them over pizza I also recommend using them as a pomodoro sauce for spaghetti, over eggs or in an omelette, on sandwiches or stirred into risotto when paired with roasted chicken.

What’s so great about tomato confit?

As the tomatoes slowly simmer in the sauce, they break down and flavor the oil as well. While I like making these confit tomatoes on the stovetop in a pan, it can just as easily be made in the oven. Simply add all ingredients to a large baking dish and bake at 325ºF until the tomatoes are burst and bubbling, about 40 minutes. Some people blanch the tomatoes first to remove the skins, but I like the texture they add (plus it’s easier!).

Burrata, a soft cow’s milk cheese from Italy, is essentially mozzarella filled with a creamy interior. It has become very popular in recent years for its rich, clean flavor. I add the burrata after the pizza comes out of the oven so it just barely melts into the pizza.

The cheese makes for a wonderful contrast of the room temperature cheese on top of the warm pizza topped with confit tomatoes. Burrata is best served as fresh as possible so be sure to check the date on the container and try to consume it within about 48 hours of purchasing it.

What does confit mean?

The method of cooking something “confit” typically means cooking in it’s own fat (think duck confit) – in this instance the tomatoes are slowly cooked in olive oil until they burst and become even more flavorful.

What does julienned mean?

When I say to julienne the basil leaves it is a way of stacking basil leaves on top of each other, rolling them up and then thinly slicing them into strips. This is a great way to slice garnishes.

Why should I par-bake the pizza dough?

This method is great when cooking pizza, using lower heat methods like an oven. It’s not going to get as hot as a grill or pizza oven so partly baking the crust before adding the toppings makes for a crisp base crust. This way it doesn’t get soggy – you want some structural integrity with each slice.

With thin crust pizza like this, the bottom crust is important. I like to reheat my pizza first in a cast iron pan or skillet over medium-low heat until the crust is crisp then broil in the oven on high until the cheese is bubbling and hot.

Is this pizza seasonal?

This flavorful pizza is best made with tomatoes preserved at the height of summer but can be made year round. 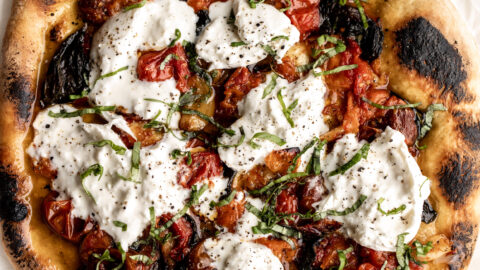 For the tomato confit:

For the tomato confit: