Prep Time: 1 hr
Cook Time: 20 mins
This twist on the classic side dish is made using coconut milk and spices.

This summer side created by sautéing kernels of corn with shallots and serrano pepper and simmered in coconut milk and a Jamaican-inspired spice blend. The corn is topped with homemade pickled shallots, sliced green onions and toasted coconut. Most creamed corn recipes are made using heavy cream – instead I use coconut milk to add a unique flavor to a naturally dairy-free recipe. Pair this recipe with jerk chicken and plantains for a summer dinner party.

Pickling the shallots adds an acidic contrast to the sweet corn and spices in this recipe. Pickled onions can be used in place of shallots as well. They have a similar flavor though shallots are slightly more mild. I sauté shallots with the corn to add additional flavor to the corn.

I love the heat and flavor of serrano peppers though jalapeño peppers can be used instead based on availability. While most Jamaican recipes use ghost peppers they are hard to find in stores and insanely hot. So for a toned-down heat, I opt for serranos.

While I use frozen corn for the ease (no need to shuck it), fresh corn can easily be swapped in.

I use a combination of paprika, thyme, cumin, all-spice and cinnamon for a Jamaican-inspired twist.

Unsweetened, toasted coconut added to the top of the corn adds texture to this recipe.

How to make creamed corn

Sauté the onion and serrano peppers then add the corn and sauté.

Stir together the spice mixture.

Add the spices and coconut milk and simmer, stirring occasionally, until the mixture has reduced.

Stir in the pickled shallots then add the corn to a serving bowl and top with toasted coconut and green onions.

How to make with fresh corn

Shuck the corn and thoroughly remove any corn kernels cut off the cob. One cob of corn will yield about ½ cup kernels. This recipe will require about two to three ears of corn to yield one pound of corn kernels.

How to make toasted coconut

If you can’t find toasted, shredded coconut then toast the coconut yourself. Add shredded unsweetened coconut to a small nonstick skillet and then heat over medium-low heat. Cook, shaking the pan constantly until the coconut has toasted and turns golden brown, about 5 minutes. Then remove from the pan and let cool. 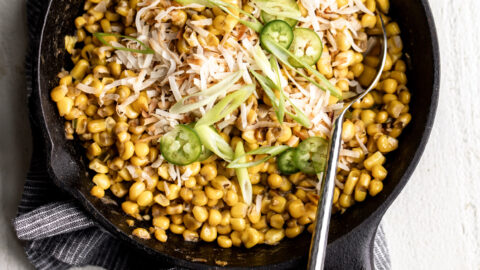 For the quick pickled shallots:

For the quick pickled shallots: