If you like classic Tex-Mex chicken or skirt steak fajitas, then you will certainly love this lightened up shrimp fajita bowl. Shrimp spiced with chili powder and cayenne are served with sautéed peppers and onions over black beans, quinoa and finely shredded cabbage with a light cilantro lime vinaigrette. While classic fajitas are served over flour tortillas, I take those elements and serve them over quinoa for an easy, balanced weeknight meal. I like serving grain bowls, especially those with quinoa with a dressing (like this vegetable quinoa salad) to add extra flavor and keep the bowl moist.

This healthy-ish fajitas recipe with seasoned shrimp is perfect for summer and the veggies and shrimp can even be made in a pan on the grill if desired. Grain bowls make for a great balanced meal without compensating on flavor. Rather than using a store bought fajitas seasoning, the simple blend of chili powder, cayenne powder, salt and lime juice adds a smoky heat.

Using quinoa in this bowl keeps it on the lighter side. Quinoa is a very nutritious whole grain. It’s very high in fiber and protein. I like using it as an alternative to rice. It’s also great for people with gluten intolerance and has a low glycemic index.

Ingredients in this quinoa bowl

The terms “jumbo” and “extra jumbo” and “colossal” aren’t standardized terms within the industry. Instead look at the numbers – they estimate approximately how many shrimp are in 1 pound. A “U” will designate that it is under that number, for example U/15 – means under 15 shrimp per pound. As the number gets smaller, the shrimp get bigger and meatier.

Make the vinaigrette by whisking together the lime juice, garlic, vegetable oil and cilantro until completely combined. Season to taste with salt. Set aside until ready to use.

Stir together the chili powder, cayenne and salt then season the shrimp. And set aside.

In a large cast-iron skillet over medium heat, add 1 tablespoon of the oil and heat through. Add the onions and sauté briefly. Add the bell peppers and continue to sauté until slightly charred. Set aside and return the pan to heat.

Add the remaining oil and heat through then add the shrimp to the pan and cook, until pink and no longer translucent.

While the shrimp and veggies cook, make the quinoa. Simmer in a pot until all the liquid has been absorbed and fluff with a fork.

Divide the quinoa among each serving bowl followed by green cabbage and black beans. Add the shrimp, peppers and onions over the top. Garnish with sour cream, cilantro and lime wedges. Serve the shrimp fajitas bowls immediately. Squeeze the lime juice over the top as desired.

Why do you use different color bell peppers?

Different color bell peppers aren’t actually different varieties of pepper – they signify how long they have been left on the vine before they’re picked. Peppers change from green to yellow to orange then red over time on the vine, with their flavor differing slightly. Green peppers are slightly more bitter since they are picked sooner than other colors, before they are technically “ripe”.

Furthermore, female peppers have more “lobes” and are sweeter when they are raw. Male peppers with three or fewer “lobes” are better for sautéing or grilling though the flavor only differs slightly. In this recipe I use a variety of colors more for aesthetic purposes than flavor profiles. You can swap in one color for another if desired.

How do you get finely shredded cabbage?

I use a mandolin on the thinnest setting to shave the cabbage as fine as possible. While you still get the satisfying crunch it’s way easier to eat. 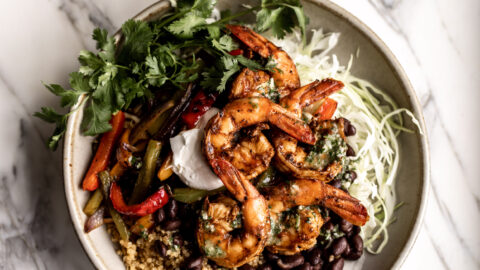 For the shrimp fajita mixture:

For the shrimp fajita mixture: