Prep Time: 5 mins
Cook Time: 30 mins
A whole roast fish is an impressive way to show off at an intimate dinner party.

A whole roast fish is an impressive way to show off at an intimate dinner party. Whole fish, also known as “in the round”, is when the fish is served with the head on, just as the fish was caught.

While serving the whole roasted fish is visually appealing – it can also be intimidating to have a whole fish sitting in front of you. A fish staring you in the eyes can make some squeamish but for me it gives an appreciation of where my food comes from. With these tips you will look like an old pro and will be making whole fish for every dinner party.

In this recipe I stuff it with a combination of cilantro, garlic, ginger with some sesame oil and fish sauce for a baked fish with Asian flavors. I like to serve this rustic seasoned fish with rice and vegetables like bok choy or seared shishito peppers.

With it’s beautiful red and pink color, New Zealand Sea Bream is a firm, meaty round fish with a slightly sweet and nutty flavor. Its found in the Gulf of Mexico as well as adjacent Atlantic waters.

It can be difficult to find whole fish if you don’t know where to look. I get mine from a local seafood store, Santa Monica Seafood. Many grocery stores only sell filets so you may have to either go straight to the source (a fisherman), special order the whole fish or go to a specialty seafood store. Rather than doing it myself, I prefer to have one of the fishmongers gut the fish and remove the scales and gills. That way they can just be filled and popped right in the oven.

I use reduced sodium soy sauce so that I can control the amount of salt in the recipe, adding more if needed.

I love the funky umami flavor fish sauce adds to any dish. It’s a great way to enhance the flavor of curries or even chicken wings. The flavor comes from a process of fermenting fish over a long period of time.

How to Make Whole Roast Fish

How to Eat Whole Fish

While it’s aesthetically pleasing it is also a great way to cook fish because it seals in the flavor and moisture. In preparing the fish for cooking, the goal is to remove the fillets from the top portion of the fish as well as the underside.

If you enjoy this whole roasted fish recipe, I recommend checking out some of these: 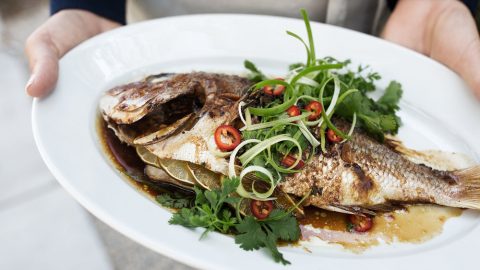