Los Angeles has some of the best food trucks, and since my boyfriend and I are both obsessed with food, we sometimes make a date night out of choosing a food truck and tracking it down wherever it may be. We have driven an hour and a half just to go to a food truck.

The things you do for a food craving. One of our favorite trucks is Roy Choi’s Kogi Beef Truck. They make some of the best Korean BBQ tacos among other things, but if we aren’t in the mood to track down the truck on twitter, these braised tacos are a good alternative.

What’s in the marinade?

Kiwi tenderizes the meat in this recipe. Blend the kiwi into the marinade to add subtle flavor while enzymes in the fruit help break down the proteins in the meat resulting in juicy, pulled short ribs served as tacos.

I always use fresh cloves of garlic, the pre-minced jars of garlic don’t taste the same. It loses a lot of the powerful garlic flavor when it’s jarred since it’s soaked in water for a long period of time. Peeling garlic only takes a bit.

I use reduced sodium soy sauce so that I can control the amount of salt in the recipe, adding more if needed.

I use dark brown sugar in this recipe (dark or light refers to the amount of molasses in the sugar). The sugar helps to balance the savory flavors of the soy sauce and pungent garlic.

Add vinegar to the marinade both to help to tenderize the meat as well as balance the sweet and savory flavors.

I use bone-in beef short ribs in this recipe though boneless short ribs can be substituted as well. When purchasing short ribs, look for well-marbled, short ribs with good meat to bone ratio. They’re one of my favorite cuts of beef because when they are cooked slowly over a long period of time, they retain a meaty, beefy flavor and the collagen melts into the sauce all in one pot.

I like the flavor of toasted sesame seeds over un-toasted. They are more of a garnish than used to flavor the recipe (most of the sesame flavor in this recipe comes from the sesame oil). If you don’t have toasted sesame seeds simply add them to a nonstick sauté pan and cook, stirring constantly, until the seeds turn a uniform golden brown color. Immediately remove them to a bowl to cool.

Garnish the tacos with diced green onion for a subtle punch. They’re members of the allium family (along with onions) and often interchangeably called scallions.

While you can often find pre-cut broccoli slaw in the grocery store in the same area as bagged lettuce and salads I prefer to make my own. First, it’s much fresher and second, I like to control the ingredients added. This is a great way to use leftover broccoli stalks after cutting and roasting the florets. I combine the shredded stalks with carrots and cabbage and season it with mirin and rice vinegar.

Mirin is a type of rice wine used as a seasoning. It can be found at an Asian market or online. If you cannot locate it then substitute with a dry white wine, such as Chardonnay or omit it entirely from the recipe.

The flavor of the corn works really well in this recipe though flour tortillas can also be used. I warm my corn tortillas by holding them over a medium flame on the stove with tongs.

How to make this recipe

Add the marinade and the meat to a sealed container and refrigerate for at least 24 hours.

Preheat the oven then add the marinade to a Dutch oven. Bring to a boil, then add and the ribs to the pot.

Cover the pot, transfer to oven, and let slowly braise until the ribs are fork-tender.

Remove the ribs from the marinade, and place on a cutting board. Shred the meat using two forks or with your fingers.

Reduce the sauce until thickened and reduced. Strain the sauce and set aside.

Mix the meat with the sauce. Top with green onions.

Pile meat, and broccoli slaw onto warmed tortillas. Serve extra sauce and lime wedges on the side.

Braising is the method of cooking meat at a low temperature for a long period of time in a tightly sealed container. It’s forgiving and it allows for tough cuts of meat to break down and become tender and juicy. Check out other comforting braise recipes here.

How to Make the Korean BBQ In a Crockpot

Brown the short ribs then add to a crock-pot and pour sauce over the meat. Turn the Crockpot on low heat and cook for six to eight hours. Move the meat around occasionally so it cooks evenly. After the ribs are finished cooking and meat is tender, remove meat and skim the fat off the top of the pot. Set the meat aside and let it cool then shred the beef.

How to Reheat the Meat

If entertaining, braise the beef ahead of time and reheat it just before serving. This also allows the flavors to meld together. 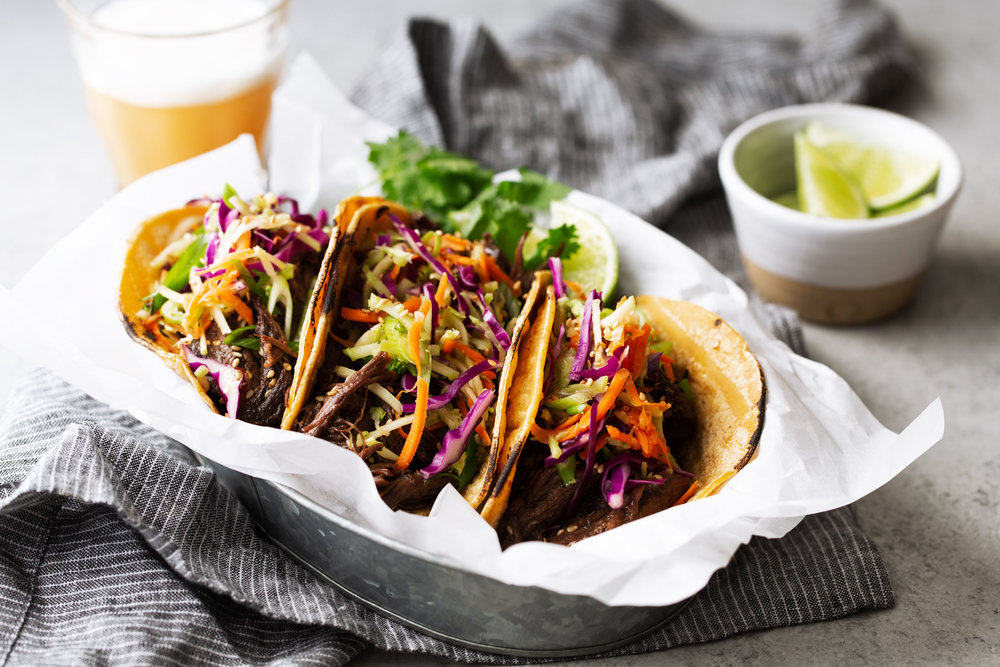 For the Korean beef:

For the broccoli slaw:

For the Korean beef:

For the broccoli slaw: