Prep Time: 1 hr
Cook Time: 30 mins
This is the ultimate sweet & savory meal. It may sound like an odd combination, but the sweet waffles taste amazing when they are drenched in the spicy maple syrup and eaten with the crispy fried chicken.

This is the ultimate sweet & savory meal. It may sound like an odd combination, but the sweet waffles taste amazing. Especially when they are drenched in the spicy maple syrup and eaten with the crispy fried chicken. This sweet and savory combination is a specialty at the Los Angeles institution Roscoe’s House of Chicken and Waffles. While there are several different locations around LA it has become a tradition of Aaron and mine to make a stop after USC football games at the Coliseum. We are always tired and hungry after a long day of tailgating with cheap beer so we stuff our faces with sweet waffles and crispy, juicy chicken.

While fried chicken is a Southern food, LA has perfected chicken and waffles.

I had never heard of this combination before eating there and it’s definitely something everyone should try. I still remember the first time I went with a group of friends in college and my friend showed me how to combine the hot sauce into the small dishes of sticky syrup. Roscoe’s has a simple menu but their secret ingredient is adding cinnamon to the waffles. I have eaten the combination at different restaurants now as it gained popularity but my version modeled after Roscoe’s chicken and waffles is still the best version in my opinion!

What cut should I use for the best fried chicken?

I always recommend to use boneless chicken thighs. In this recipe it’s easier to eat then cutting the meat off of the bone and they are still flavorful and tender. I find that for fried chicken using some form of chicken thighs are best.

What sets this apart?

When should fried chicken and waffles be served? 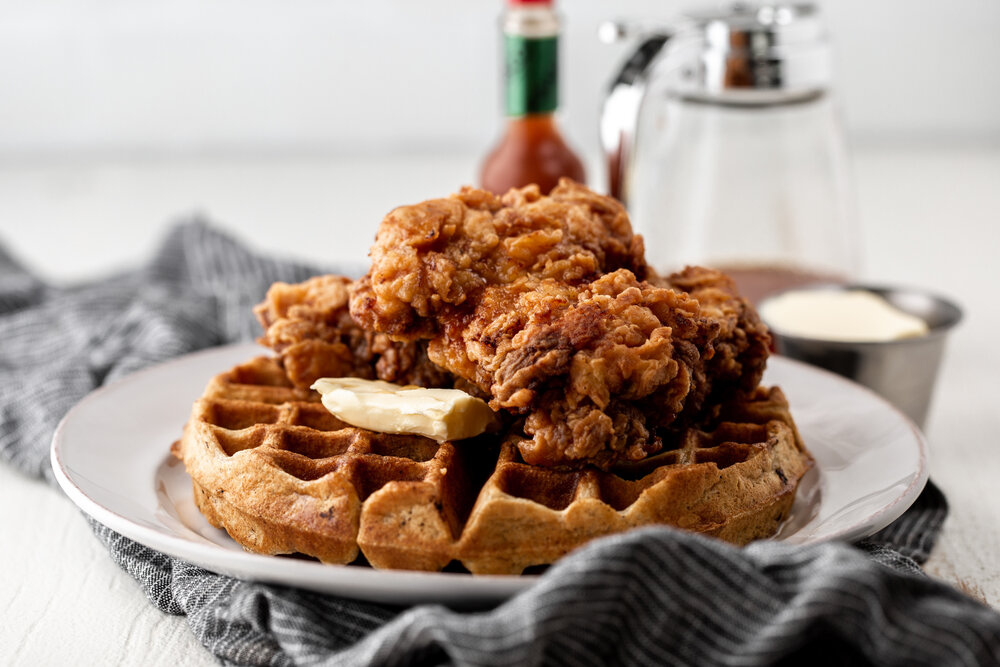 For the fried chicken:

For the cinnamon buttermilk waffles:

For the hot sauce maple syrup:

For the Fried Chicken:

For the cinnamon buttermilk waffles:

For the hot sauce maple syrup: